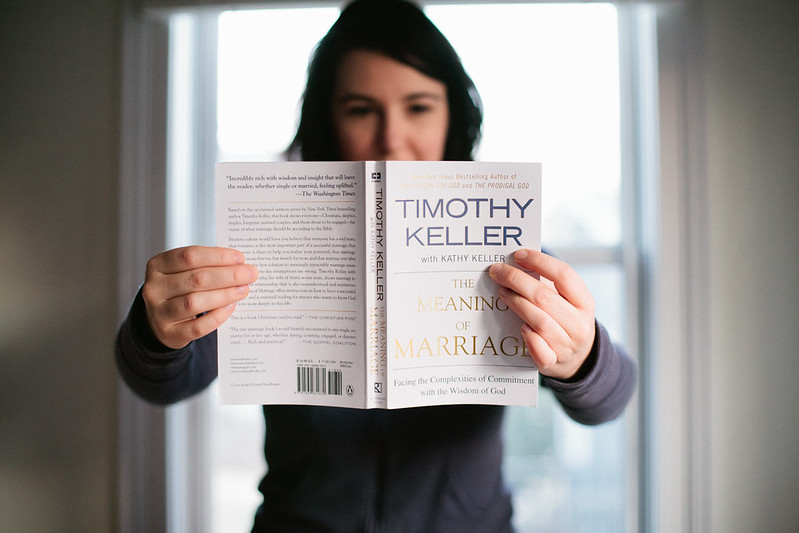 I did not intend for this to be the Winter of Tim Keller, but here we are with three books by him in a row (…ish). Thankfully, he quoted Jane Eyre in the final chapter, so I already know what I’m reading next. (JANE EYRE! REASON TURNED TYRANT! That wasn’t the section he quoted, but the section he did quote is equally disciplined, and he named yet another reason she is THE BEST and I LOVE HER THE MOST and then I spent the moments before sleep recapping, for myself, in dramatic fashion, the plot of the book, and IT IS SO DRAMATIC AND GOTHIC AND MY EVERYTHING!) (This is going to kick off a Spring of Bronte, since one of my friends is currently reading a Charlotte Bronte biography, AND I realized there are works I haven’t read available free for my kindle!)

Ahem. Back to this book. It has sparked so many good conversations and intellectual side pursuits in the past two weeks that I have been referencing it constantly! I couldn’t avoid talking about it if I tried.

Though, can we have this conversation with a dose of humility (on my side) and…ummm…restraint? I don’t miss the irony of finishing and posting this near Valentine’s Day. And I was reminded just yesterday, by a dear friend, that I’d REFUSED to consider reading this book last fall, even though my church community was reading and discussing it, at first because I was single and didn’t want to get caught up in a conversation about marriage, and then because I was starting to date someone and didn’t want to get caught up in a conversation about marriage. (Is there an echo in here?) Now, a few short months later, I’m seriously dating someone (here’s where the restraint comes in, folks – please refrain from winking and joking, because this is a vulnerable place), and realized that any idea I had about how that might look was totally off base, that this is a lot more work and vulnerability than I expected, and that I need a point-of-reference more comprehensive than Not A Chick Flick. (Because I will eviscerate a chick flick swiftly and mercilessly – apologies to housemates for whom I’ve ruined the viewing experience – but rightly naming something as shallow doesn’t necessarily mean you understand depth.)

“It is hard to get a good perspective on marriage. We all see it through the inevitably distorted lenses of our own experience.”

Welp. This book was awesome. I appreciate SO MUCH that Keller attacks our common idols – he points out all of the ways that society and culture and the church have wrongly viewed marriage (both historically and in the present), and he brings us back to the Bible, to what God says, to what Jesus says. It’s so refreshing that he acknowledges these influences but doesn’t necessarily engage with them, or pick a side, but instead offers a third choice.

I should definitely pull quotes from this. [Update: I tried.] Especially about the work of, the commitment to, the reasons for marriage. So level-headed. So realistic. So much more sustainable than romantic notions. [Yes. All of this. I tried to pull quotes, but realized that anything taken out of context was going to sound incomplete. And I don’t think it’s appropriate, or legal, to transcribe entire chapters onto my blog.]

“In this book we examine the Christian understanding of marriage. It is based, as we have said, on a straightforward reading of Biblical texts.”

That’s a fairly thorough summary. If you’re interested in that, I highly recommend this book.

Marriage haiku, based on the lessons of this book:
not a fairy tale.
no consumer transaction.
it’s tough, but fruitful.

The serious Christian, set down for the first time in a Christian community, is likely to bring with him a very definite idea of what Christian life together should be and to try to realize it. But God’s grace speedily shatters such dreams. Just as surely as God desires to lead us to a knowledge of genuine Christian fellowship, so surely must we be overwhelmed by a great disillusionment with others, with Christians in general, and, if we are fortunate, with ourselves. By sheer grace, God will not permit us to live even for a brief period in a dream world. Only that fellowship which faces such disillusionment, with all its unhappy and ugly aspects, begins to be what it should be in God’s sight; begins to grasp in faith the promise that is given to it. The sooner this shock o disillusionment comes to an individual and to a community the better for both. This hour of disillusionment, difficult as it is, is in the end incomparably profitable, because it so throughtly teaches us that we can never live together by our own words and deeds, but only by that one Word and Deed which really binds us together – the forgiveness of sins in Jesus Christ. Christian brotherhood is not an ideal which we must realize; it is rather a reality created by God in Christ in which we may participate.

Natalie: So, did you send that email?

Maggie: I did. I felt like a crazy person. I didn’t even bother to introduce myself. I was just like, “Hey! Fun idea!”

Natalie: I think that probably IS the best introduction for you.

Our Readers Guild met this week, to discuss the book. It had been a while since I finished it, and I was yet again reminded of how awful my memory is.

[Which, could we take a sidebar and talk about memory for a moment? And how the only memories that stick with me are either images or emotional impressions. Is this how memory works for everyone? I guess, if I’m being fair, I can also recall many random facts – but I also fail to recall very many. Ideas only stick in my head if they have a story attached. (This explains, slightly, my tendency to retell every life event as Epic Drama.) I’d love to hear how memory works for you.]

Apparently, I considered the book incredibly depressing. But I had failed to notice the subtle nuances in the last few pages of the book, and the (trumpets of obviousness) paragraph where the book title comes from, which is challenging him not to look back in despair on his life but to seize what remains.

My favorite part of the discussion, however, was how all five us us (single women) threw our hands up in the air and exclaimed with shrieks of frustration when discussing this narrator’s apparent inability to realize that this woman, his co-worker, is making herself as available as possible without being indecent. And how, the one time he is rebuked, not romantically, but when she cancels their friendly chat over tea because she is feeling ill and not up for company, he interprets that as the end of their friendship and essentially avoids her after that point.

Guys, are you listening? Signals get mixed sometimes. Don’t give up so easily.

A married couple in my small group will only see each other on weekends for the next few months, as the wife is off at the police academy.  (I know.  Yes.  She is awesome!)  Their prayer request for this time is that they can miss each other well.

This is beautiful, and challenging, in so many ways.

Our first instinct would probably be to wish that the time passes quickly, or that they can keep busy – and distracted – enough that they don’t feel the burden of the distance.  But they have realized that if they don’t feel that lack in their lives during the week, they’ll spend every weekend re-learning how to be together.

On the other hand, they’re not aiming to wallow in this loss, to spend every day crying bitter tears over their present circumstances, or to live for each weekend when they’re reunited.  They’re both focusing on doing their jobs well during the week, and utilizing the time that they would otherwise be spending together.

Any of y’all who know me probably already get where this is going.  As a single woman (who hopes to be married and have a family one day), this is a balance I aim to find.  How do I acknowledge this longing – and cultivate this motivational feeling of lack – without allowing it to turn to distraction or bitterness?  How do utilize this time while I’m still single – when I still have the opportunity to be selfish with my time and make decisions independently – without burrowing my head in the sand?

Those are the questions I have today.  It’s taken me a long time to find those.  And, of course, others have considered them.  (If you want some attempt at closure, you should go find out what they think.)