What is this world we’re living in where I am blogging about ALL THE THINGS?

Mostly one where I realize my current method for keeping track of recipes is…no method. Or maybe too many methods. I have some pin boards, I have some emailed lists to myself. I also have a NUMBER of recipes printed out and sitting on various surfaces in the house because I’m currently internet-less at home so pinboards and emails are useless in the kitchen. (I should clarify that I’m internet-less AND a real miser about data usage on my phone. I’ve loosened it up a bit, but my friends might stage an intervention before long.)

Okay, so what am I cooking? 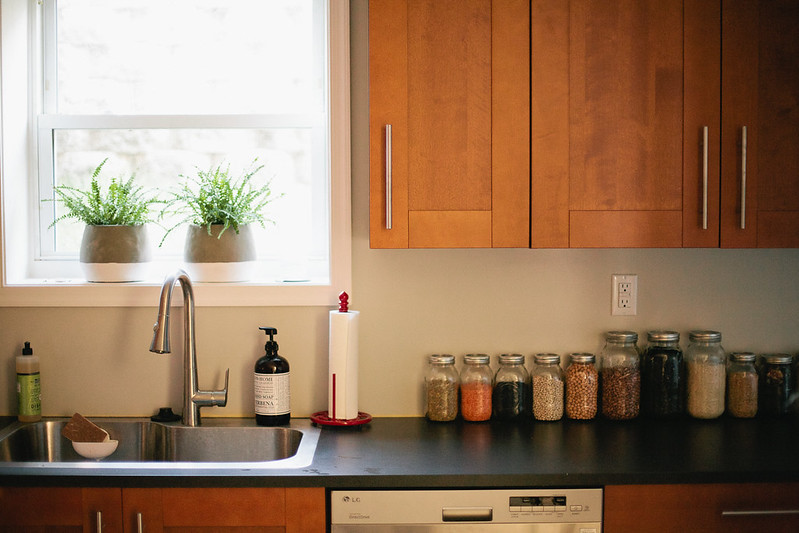 Let’s start by admiring all of those beans and lentils in the kitchen! I inherited this gorgeous display system from an old housemate – who upgraded to prettier jars when she moved into her own space – and in the process I also inherited the contents of some of those jars. Some which have sat in those jars, looking so pretty, but underutilized, for many years. When I moved, I inspected the contents of every jar (sniff test) to determine which were still worth saving. Thankfully, dried beans are nearly indestructible!

But my determination to use them, mixed with my desire to cut down my food budget in this new home-owning reality, means I get to try new recipes and return to some old faves.

1. Chana Masala from Orangette – since I’m intimidated by both chickpeas and indian cooking, I thought I’d try to tackle both in a simple recipe. Molly’s recipes tend to focus on making magic from mundane ingredients, so I thought she’d be a trustworthy source. (She has some other bean recipes that I plan on testing soon – especially when I tackle that giant jar of brown beans.) The verdict? DELICIOUS. Though I realized, as I was cooking, that I have no idea what chana masala is supposed to taste like. But I’m a fan of this recipe and will definitely make it again. (Disclaimer: I used canned chickpeas as recommended in the recipe.)

2. Oven-Roasted Chickpeas from the kitchn – this was my first attempt on the dried chickpeas, but since it was a mixed bag, I didn’t want it first on the list. The few chickpeas that I managed to crisp perfectly were delicious, but it took longer than I expected, and the best tasting ones ended up looking burnt. Also, it was a failure of execution/planning, because I didn’t realize they’d soften if stored. So this is something I might attempt again for a party treat, or in smaller batches to snack on.

3. Cuban Black Bean Soup from the kitchn – I tell everyone to make this soup because it’s so delicious.I’m unsure how many people believe me, so I’ve started serving it to people so they can TASTE THE DELICIOUSNESS and then ask for the recipe. I love this recipe so much that I made it for my first dinner party in the new house, to combat my dinner-party-hosting-anxiety. If you don’t loathe black beans, you will love this soup.

4. Salad with Apples, Cranberries, Pepitas from Cookie + Kate – I had some sunflower seeds on hand when someone asked me to bring a salad to an event, so this recipe popped up in a google search. I bought some Lemon Vinaigrette from Wegmans, and this has turned into my default fancy salad for the moment.

One thought on “recipes I have loved in the past month”