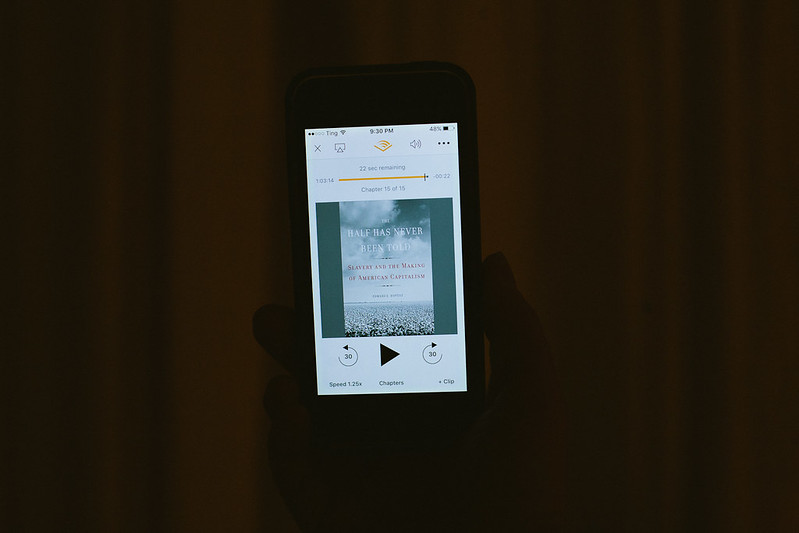 It’s audiobook season! So many roadtrips this month, and I decided to tackle this 10-hour monster. It was recommended by a friend, an English professor, and the book was much more academic (read: dense, boring) than I might have tackled otherwise, but the content was incredible. The subtitle, which you can’t actually read in this photo: Slavery and the Making of American Capitalism.

As an Ohioan who remembers touring homes that were part of the Underground Railroad during our American History lessons, I tend to approach the history of slavery in my current Virginia town with feelings of smugness and distance. This book tackles that early, implicating everyone in the growth of slavery – Northerners and Europeans, though they may have been morally opposed to owning slaves, were quick to invest their money in slave ventures. (What shrewd investor wouldn’t? Nothing pulls a profit as quickly as an industry with free labor!) The first few chapters described the slave-dependent cotton expansion as an investment opportunity, and detailed the commodification of human bodies. This narrative of wealth and economic growth overriding questions of morality can be applied many places in the modern world.

A few other chapters dug deep into the narratives of individual slaves, detailing the ways their lives and families were constantly upended and shattered as these “resources” were moved from one farm to the next, and describing the effectiveness of torture and abuse as motivational tools. One chapter dove into the mental and physical adaptations necessary to increase cotton-picking productivity, and I would read another book about the ways this relates to the industrial revolution, and the quest for efficiency that continues today.

The end of the book got a bit too caught up in political history for my liking – I most enjoyed the portions that were told from the perspective of slaves themselves – but I understood the desire to explain the social, economic, and political spheres that led to the Civil War.

So even though I claim this book was boring, it sparked a lot of thought and conversation. Clearly I don’t know what my nerdy heart wants.

(Check out this great HuffPo summary if you want to hear more about the book.)