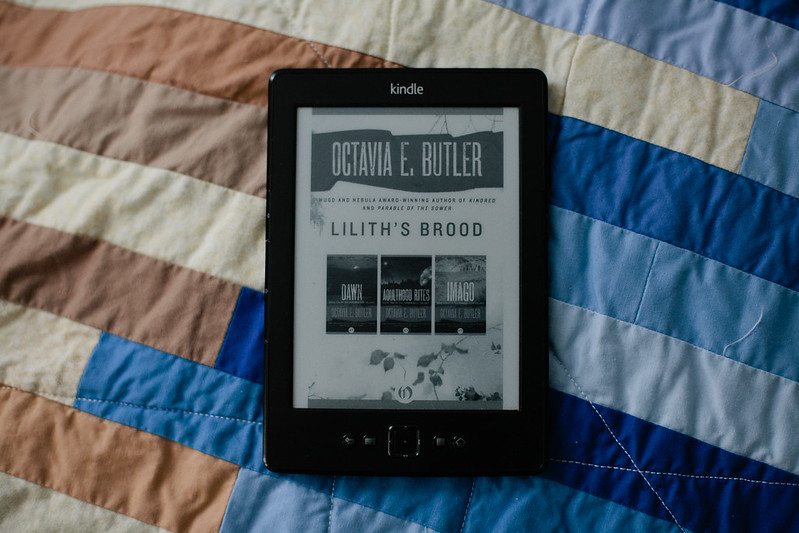 As tends to happen, I have a large backlog of books finished, so I have to dig way back into the archives of my mind to remember this one. It’s technically three books, but they’re fairly short and have been combined under this single title for quite some time, so I’m going to count it as one even though my end-of-year tally might suffer for it.

If you’re unfamiliar with Octavia Butler (I was until last year), she’s a black woman who has been writing science fiction since the 70s. Two responses to those facts: she is incredibly badass, and it’s terrible that I not heard of her until 2015. Thankfully, I’m in the process of remedying this.

wake in a new world
humanity redefined
learning to rebuild

Earth is destroyed by war and aliens have gathered a remnant of humanity. They have healed their bodies, but correcting the societal errors that led to their destruction is much more challenging.

There are two prominent ideas/thoughts that stick with me since I finished these (back in August? I was actually reading these on the metro in Paris.):
The first is a complicated description of exposure to the alien, described in a way that is both repulsive and alluring. This nuanced sense of the unknown is powerful. And as I’m describing it, I realize that it’s also deeply connected to the second idea. It was easy to find interpretations of racism in the books, and to find calls for understanding and empathy. It’s not lost on me that the healthiest society imagined in these stories is one in which the human and alien can coexist peacefully.