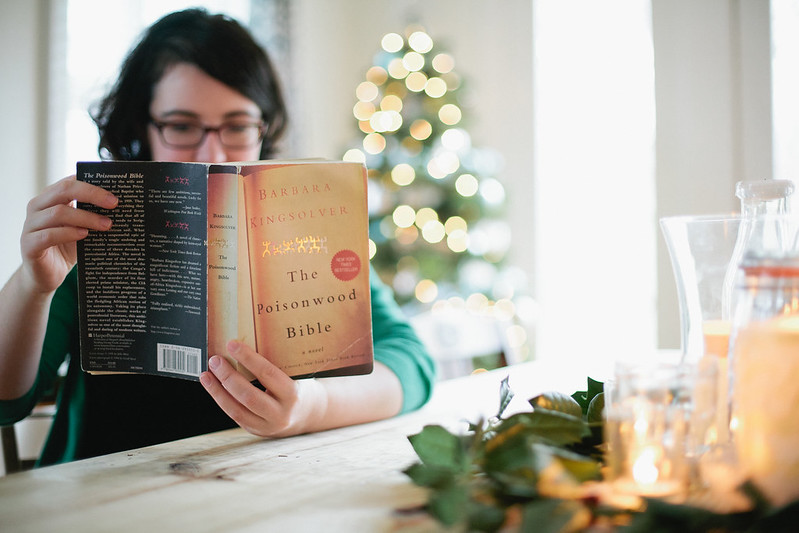 I have a lot of feelings about this book, and most of them are useful.

This is one of those books I’ve owned for a while now, but haven’t been motivated to pick up. I knew the overall story was about an American, Christian pastor failing to understand anything about the Africa where he is sent, but I didn’t know the story was told only from the perspective of his wife and daughters. The idea of five strong, distinct female voices was enticing enough to overcome the anger I knew I’d feel toward this man.

These five women are so delightful! The mother is repentant, full of regret, with a depth that you can tell is rarely recognized by those around her. If I attempt to describe all of the daughters, I worry that I’ll spoil some of the fun in the book, but they start out as: the Mean Girl, the Daddy’s Girl, the Weird One, and the Baby. Those descriptions don’t do them justice! The Weird One, for instance, is nearly mute, and half-paralyzed, and her thoughts are filled with the most creative, chaotic content that includes an obsession with palindromes. You can’t read her chapters without being caught up in her mind.

In some ways this felt like a mystery. You’re discovering information about Africa. You’re discovering information about this father figure. The tension is high from the beginning, and the breaking point comes earlier in the story than I anticipated – beautifully, it follows these women for years (decades even) after the crisis and you’re able to see the ways they were shaped by it.

Though I thought I’d read Kingsolver before, when I described the book I thought was hers a friend said, “She sounds a lot like Annie Dillard.” Note to self: read more Kingsolver.

One thought on “40 books finished in 2015: The Poisonwood Bible”