I’ve been feeling frustrated with myself, with the fact that I haven’t made any clothing in the last few weeks. But then I reviewed my latest version of the Infinite List and realized that I’ve made progress on many fronts.

1. Sleep shorts? MADE SOME. Made a lot, actually! Multiple copies of both the Salme Elastic Waist Shorts and the Lakeside Pajama Shorts. And I’ve been sleeping in them, rotating as I always do with pajamas. My absolute favorite pair, the ones I wish were never dirty, are the Salme version I made from an old set of pillowcases. I think the Salme pattern will be my winner – the one I return to for more versions of lounge shorts – but I might have to give my Lakeside one more try, in an equally soft cotton. Either way, I AM WINNING AT SLEEP RIGHT NOW.

2. Fitness shorts? I reviewed the swatches and color cards, and decided to commit to a few yards of a high-end compression fabric. It’s sitting at home, waiting to be cut into.

3. More Lady Skaters? It hasn’t happened yet, but I think my last two were impulse sewn, which means I’m just waiting for another impulse.

4. Pencil skirt? I haven’t made one yet, but I bought one with a gift card from the Gap, to tide me over. Wearing that has helped me to determine that I probably want a non-stretch pencil skirt (because it is both wrinkly and baggy by the end of the day, and I’d prefer just wrinkles).

5. More things? OH HEY THIS IS WHERE IT GETS INTERESTING!

I have no idea when I started making this, but it’s a bright green rayon, fully lined. The original intent was to add an elastic waist, like its dress twin, but after a few frustrating runs at the armhole finishing, I think I put this in time-out. It waited there, un-elasticized and un-hemmed, until one morning when I was motivated enough to HEM THIS DRESS AND THE LINING before work. Since that morning, I’ve worn it both belted and with a cardigan.

Also, THIS HAPPENED. Or, if I’m honest it’s been happening for years, and I found myself approaching a significantly fun moment in the process. What that means is that a lot of my evening sewing time has been focused on quilting instead of garments.

And not just for one reason… 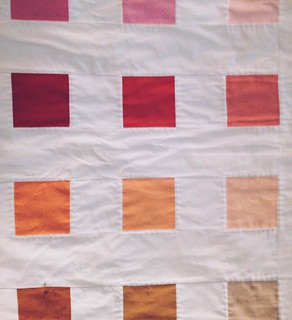 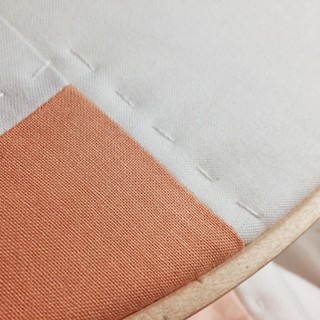 Now that the nights are getting colder, I’m reminded that I don’t have a quilt large enough to drape over all sides of my bed. (They’re all closer to an Epic Throw size – large enough to cover a mattress but not hang over the sides.) This one was just waiting to be quilted and bound with no particular deadline. I decided on a simple hand-quilting design, and 100 stitched boxes later, it’s ready to be bound and washed and thrown onto my bed triumphantly! (Next time I plug in the sewing machine, this will probably be the reason.)