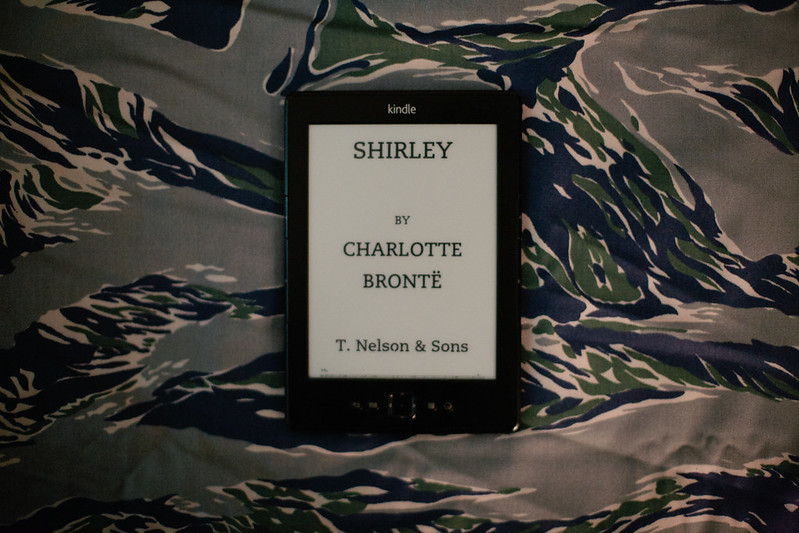 You guys. I’ve done it. I’ve read every book on this list and can now have long discussions (with myself) about the differences among Bronte novels!

But first I’ll talk about Shirley, because I just finished it and need to beg everyone to read it so that a) they can be delighted like I was and b) we can talk about it.

Observations: Shirley is the most playful of any Bronte novel.* Honestly, it might have broken the very definition of a Bronte novel! (I’ve said Bronte too many times now. I’ll try to stop.)

The titular character, Shirley, is a wealthy land-owner who refers to herself as “the gentleman of the house” and pointedly jokes about all the things that men (or wealthy, land-owning women) can do that women can’t. It’s amazing. It’s hilarious. I loved it. (Amazing thing I just discovered – until this novel, Shirley was a distinctly male name.)

How can I help you?
I am the man of the house.
I am Miss Shirley.

I should be a little honest and admit that the first section is incredibly boring. There is an attempt to describe all of the characters in this community, but it’s not done well. (Or, it’s not done as well as George Eliot, who now holds a place in my heart for describing entire communities so fully that when action happens, you are delighted to discover how it impacts every single soul.) Even though the book opens on a set of curates, and wraps up by telling us what happens to them, they still felt like wallpaper.

Also, this is a book that I sort of wished hadn’t ended with as many marriages. I was fairly hopeful that Shirley would continue to be strong and masculine and an overall badass to the end, but instead we were introduced to her long-lost love, who avoids my ire by seeming to have an appropriately high view of her, moods and all.

The thing that I loved about this book, second to Shirley, was how lovingly it described the single woman in those times. There is one section, when our protagonist (who, amazingly, isn’t Shirley) is wallowing in despair (Bronte bingo) about love lost, and she chooses to focus her recovery time by learning from the wise, respected, awesome old maids in the community. The way these women – their lives and their influence – were described brought me to tears. Again, I wouldn’t have been sad if this woman’s story had ended in respectable singleness. (But this is also pushing against my own story, so I might be more fully invested in the declarations of love the next time I read this novel.)

*I came to this conclusion during a segment told from the perspective of a 15-year-old boy who is scheming to help two estranged lovers see each other. He develops a crush on the woman, and his obsessive teenage thoughts are so excruciatingly honest.