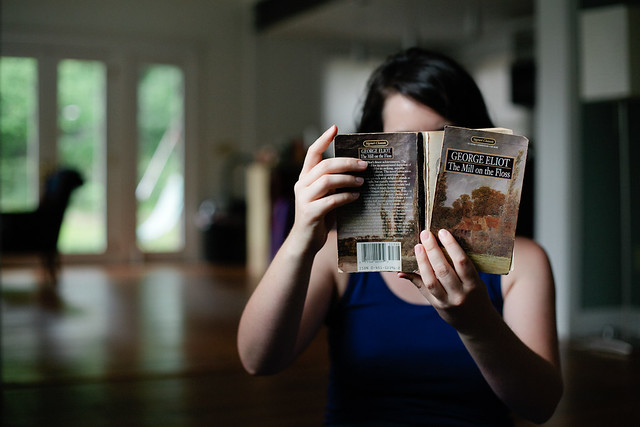 here’s my disclaimer:
nothing happens for the first
two-hundred pages*

This book. IS. AMAZING. But I can only recommend it to people who have patience for VERY LONG BOOKS. Because it’s from the same author as Middlemarch, and though it’s not quite as long…it’s the same pace.

The payoff is equally wonderful. I think that, if you can train yourself to read a book with so little plot (something that the modern reader isn’t trained to do), it’s a rich, worthwhile endeavor.

Unfortunately, it’s fallen in the middle of a Books Finished backlog, and I’ve already lost most of my coherent thoughts about the book. THANKFULLY, I have an email to myself with ALL of my immediate emotional responses to finishing the book, so I’ll include them here. (Spoilers ahead – though mainly about character deaths, and if you know this book is referred to as a tragedy, those might not really be spoilers.)

-Reading the back cover and knowing that Maggie would both be the center of the story and would have “tragedy” heightened my attention and the suspense of it all.
-I expected her to be forced to marry someone, or to choose to marry someone unwisely, based on what I remembered from Middlemarch. I also expected her to die, constantly, and unexpectedly – perhaps because the foreward QUOTED HER GRAVESTONE?!? (In some ways, this meant that her death at the end was as satisfying as the long-awaited proposal at the end of an Austen novel.)
-Poor girl was really trying to do/be her best, and was seriously hindered by her family/circumstances/desire to please her brother at every moment. (People pleasing: JUST STOP.)
-I hated her brother. HATED HIM. He seemed really mean and vindictive, the whole book. I guess I’m happy for Maggie that they reconciled in the end, but…yeah…still really hated him. He was Pure Law. I sort of hoped he’d make some poor choices and have to eat crow.
-I also hated their father. He was SERIOUSLY MESSED UP. Wow.
-The family quibbling was entertaining, and so believable.
-Lucy and Phillip FTW. They were both super-quality people. I have such love for them both!
-Dude, Stephen? Not exciting. Spoiled brat. Couldn’t even handle Maggie saying no to him. Was really emotionally manipulative, and thought he was doing it in the name of love? Ugh. I was just…ugh. I guess if Maggie was tempted to marry him – instead of Phillip who was AMAZING – it’s better that she died?