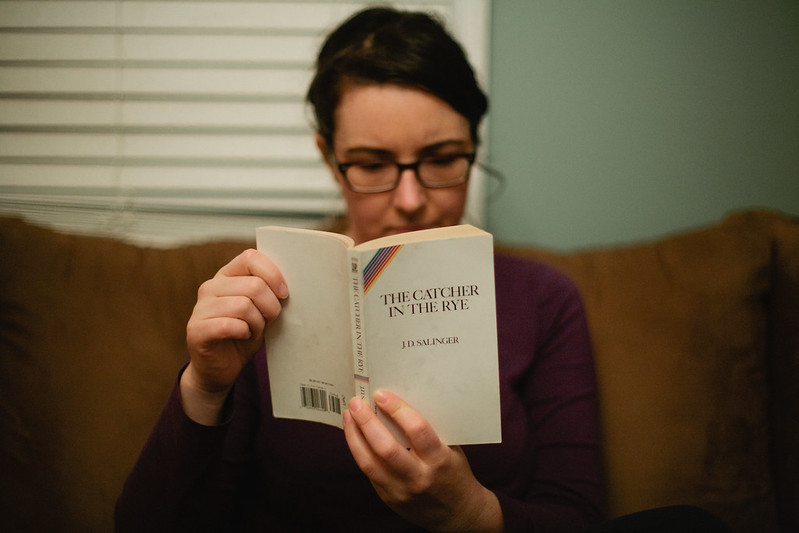 I wrote this haiku mid-way through the book. I may have called it a Catcher in the Rye-ku:

W.T.F.
Holden Caulfield is a punk.
Why do we read this?

(It was an exciting moment when I counted out those first five syllables.)

Let’s see…here are the things I knew about this book before I read it:
-Mel Gibson compulsively purchases copies of this book in Conspiracy Theory. And, from that movie, I also learned that the book is links to multiple assassinations.
-It’s found on most high school reading lists, and also on the banned/challenged book list.
-My eye is always drawn to that simple cover design.

I was a little surprised to discover that it was about a day in the life of a rich white prep-school kid from NYC. Of course, it was an unusual-ish day (or two), but it was much more mundane than I anticipated, especially with all the hype and murdery associations. I remember being surprised by this when I read Franny & Zooey as well. Maybe this is my own baggage, but I always have a strong sense of disassociation when reading about privileged teenagers. To be fair, I have plenty of my own privilege, but I guess I hold strongly to my suburban midwest public school upbringing. (Perhaps it’s the urban/suburban dichotomy that’s so jarring – I never snuck into nightclubs or took taxi cabs as a teenager. It was all about watching movies in basements and hanging out at chain restaurants where my friends worked.)

[Some of these complicated feelings about rich city folktales are related to a number of books I’ve read – it’s been jarring to me how many “classics” are focused on this small slice of the world population. Though I’m still committed to reading classics, I’m also very interested in seeking out authors with more diverse backgrounds. Reading, for me, is an act of empathy, an attempt to understand the world from another perspective, and with that goal in mind it’s reasonable that I’m disappointed by the number of highly-recommended books that have the exact same perspective.]

Okay back to THIS book. I realize, upon reflection, that it’s highly quotable. That probably contributes to its popularity. This line in particular really stuck with me:

I found Holden to be insufferable, but I realize that has a lot to do with my age. And perhaps some to do with the unhealthy ways our modern culture has adopted his outlook. I think angst and alienation are often defense mechanisms – excuses to keep people at arms-length or to avoid the work of understanding another or being understood. If I were to challenge Holden on any of these things, he’d say any number of reality show clichés – that he’s “just keeping it real”, or that he’s “not here to make friends.” His affectation of offensive charm isn’t charming at all.

Perhaps had I read this book as a teenager or young adult, I wouldn’t have been quite so hard on him. (It’s not lost on me that the one quote I wanted to share from the book is something an adult said to Holden while encouraging him to get some perspective.) Perhaps I’m not alone in finding this book repellent, and the reason it’s on so many high school reading lists is so that we’re challenged to discuss healthy and unhealthy ways to interact with society.

What are your thoughts?