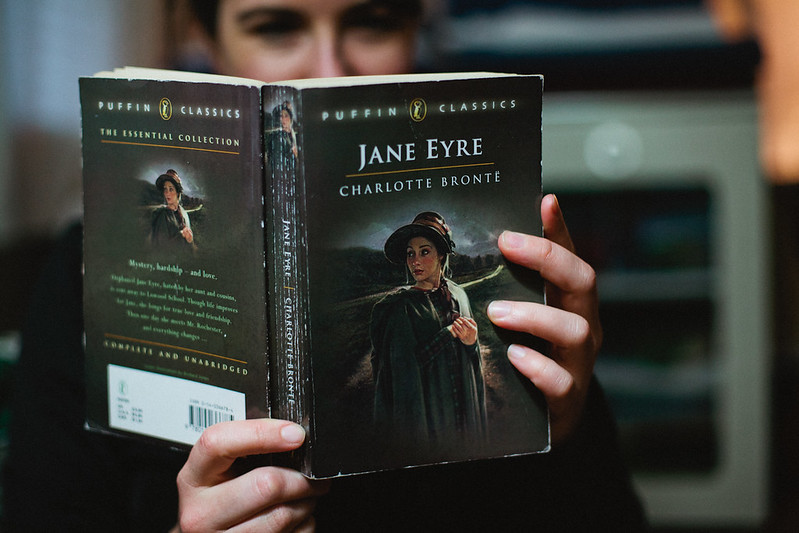 It is so shocking that I haven’t read this book even once in the past five years that I just double-checked my archives. But it must be true! The blog knows! And since I’ve recently proven that I’ll even blog about books I don’t want to admit I’ve read, I have to trust the blog.

This book and I have history. I first read it in 2005, shortly after I moved to this town at the behest of my best friend from college. For that first glorious year we lived in the same apartment complex and ran errands together, scooting around town in her beat-up car, listening to WNRN, talking about how astounding it is that we’re adults, and imagining what form our future lives might take. I can’t really explain why I have such vivid memories of that car and those conversations, but they are a touchpoint in my life, especially now that almost a decade has passed and our lives, though both pretty awesome, are now VASTLY different. (She’s making peace with her life at home as a mother of two, contemplating homeschooling, and carving out time to work on a novel.)

Another vivid memory I have of 2005 is when she realized I’d never read Jane Eyre, or any other Brontë novel. I was (easily) coerced to read it IMMEDIATELY so we could discuss every ridiculous and wonderful detail at length. And reader, we did just that. About this book and so many others. (Now that I’m remembering things, she was ALSO the friend that convinced me to start reading Harry Potter in 2004, which means we waited for the final two books together, and it became normal for us to just casually state, as we’re eating popcorn on a Friday night, “I wonder what Harry’s doing right now.”)

And THEN, we can probably attribute, in part, my book reviews to her. We tried, years ago, to create a joint blog where we’d read and discuss classic books – particularly those from high school reading lists that everyone HATED because we had to focus on repeating themes and foreshadowing and blah blah blah instead of just gushing about how totally psycho Heathcliff was and wondering what modern methods he and Catherine would use to torture each other (and the rest of us, because you know it would include passive-aggressive FB posting). Unfortunately, it never REALLY got off the ground, so for one shining moment I’m going to share with you our thoughts on Jane Eyre since we decided to re-read it together this spring.

Here’s a haiku for this momentus occasion:

One Shining Moment:
our literal obsession
on display for all!

And here’s a haiku for the book itself, because I care for you:

Best line: “he made me love him without looking at me.” SHIVERS. I adore that line.

Biggest wtf: a tie between Aunt Reed (because come on, even on her deathbed) and pretty much everything about St John. Let’s talk about St John because I get him more than I did the last time I read it, but I still don’t feel like I have a good handle on him. Thoughts?

Best lol: when Jane makes herself draw a plain picture of herself to contrast with what she imagines Miss Ingram must look like, OMG LOL Jane.

Other noteworthy moments: Mr Rochester specifying that he doesn’t hate his wife because she’s mad but because she was a horrible person before she became mad. I thought that was interesting. Mr Rochester is such an interesting character. I also understood Helen Burns better than I did last time but she’s still so enigmatic. In the biography I’m reading it says that Charlotte based Helen Burns on her sister Maria.

Do you doubt me, Jane?
Entirely.
You have no faith in me?
Not a whit.
-That exchange. Was from the “courtship” phase, I believe, when Rochester is being all flirtatious. I took a photo of it with my phone and have been holding it close to my heart, because WTF.

I was paying attention to all of the times Rochester was working out his justification for what happened. He has LOT of muttered conversations with himself and with God throughout that book – Jane should have been piecing together SOMETHING. And, yet, I was so much more sympathetic to him after reading all of that. Like, he really REALLY wanted to do what was right, but was in a sham marriage to a monster. Poor guy! I mean, he didn’t even become a playboy, that we know, until AFTER the sham marriage. I think the argument that he was tricked into the marriage holds more water, for me, than the rest of it. But yes, that his wife was mean to him and slept around on him BEFORE she went totally insane. (Also, I still get confused about how racist all of those references are to her being dark. I mean, was this mostly a suppressed shame the English had for the exploitation of their colonies? Though…I guess they married their nobility (example: Rochester) off to Creole women, which means they respected them in some ways, but WHY ARE THEY ALWAYS CRAZY IN THE END?)

omg Jane is literally the strongest, most awesome woman. ALSO, Amy, I have been MIS-QUOTING my alleged favorite passage from the book! I thought it was “Reason, turned tyrant, held passion by the throat.” But it was “CONSCIENCE, turned tyrant…” Which was quoted by Tim Keller (<3) in Meaning of Marriage, as referencing the fact that she had to seek wisdom OUTSIDE HERSELF, that her passion, AND her reason, BOTH wanted to stay with Rochester, but she knew it was wrong and that God would not approve, and so maybe you, also, would have heard the voice of God, your conscience, and chosen wisely.

And then, to totally add insult to the injury of mis-quoting, it is ST JOHN who pits reason against passion in his attempts to suppress his true feelings for that adorable curly-haired lady. ST JOHN WHY DID I ALIGN MYSELF (accidentally) WITH ST JOHN!?

I think St John is one of those Christians who thinks the physical world is all sinful and irredeemable. And that’s why he’s, like, I will not be in love, I will not have money, I will not have ANY comforts. He just wants to mortify and repress his body and his feelings, and Do Good Work, which can only be good if it’s difficult/impossible? Ugh. And he thinks that’s the Only Noble Choice for a Christian, which is why he’s so insufferable. HE WAS SO MUCH MORE INSUFFERABLE THIS TIME.

Yes, I love how Rochester is continually trying to justify himself to himself AND to God. And yes I agree he was tricked into the marriage! I want to read Wide Sargasso Sea now — I’ve never read it but I’m so curious.

LOL, I can see you unconsciously, unintentionally aligning yourself with St John. You so want to do the Right thing, and the Best thing, just like he does, except you, unlike St John, have a heart! I agree that he was way more insufferable this time, believing there is a best way to serve God, and it’s leaving the world behind and going to India. No exceptions, no excuses. I loved how Jane realized God’s will for her to go back to Rochester and that it was the right thing to do. I need to reread that passage again because I loved it.

Except we’ve also agreed to read (together) The Tenant of Wildfell Hall. I’ve already finished it, but I might wait until she finishes to expand the discussion, especially since she’s working on (or has finished) a biography of the Bronte sisters and Wildfell Hall is a morality tale allegedly based on Anne’s experiences of their nephew’s alcoholism. (The author’s introduction alone is a master class in heavy-handed morality.)

The Spring of Brontë continues!